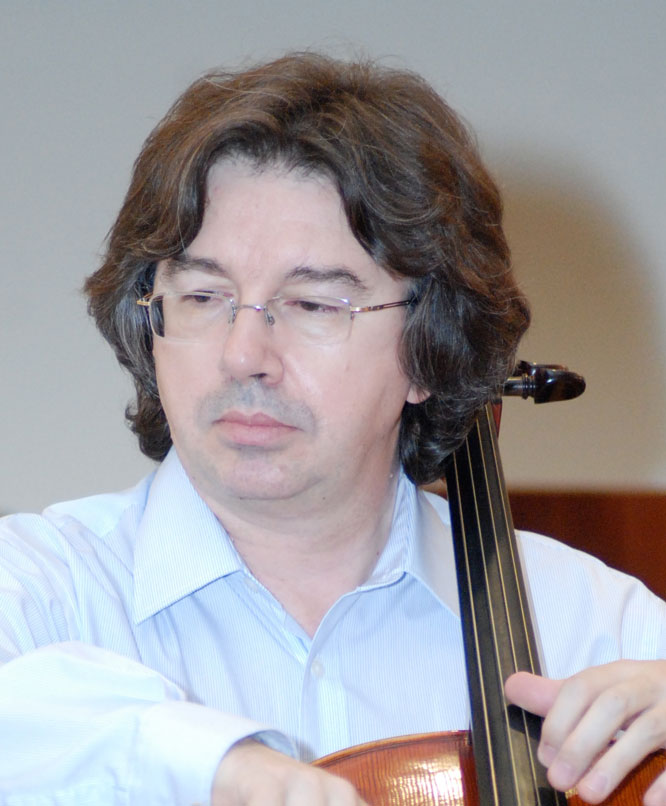 Born in Kraków in 1956 he began playing the cello at the age of 7, gaining his diploma at the High School of Music (presently Academy of Music) in Kraków in 1979 and continued his studies at Yale University. In 2012 he finished postgraduated studies MBA Higher Education Management in Pozna?.

He was a prize-winner of several national and international cello and chamber music competitions – in Evian, Florence, Pozna.

He gave concerts as a soloist and performer of chamber music in France, Italy, Switzerland, Yugoslavia, USA, Brazil, Germany and Malta among the others.

In 1979 he joined “Capella Cracoviensis” Chamber Orchestra. In 1981 he was appointed Principal Cellist of Krakow Radio&TV Orchestra and from 1989 to 2012 he hold the same position at National Polish Radio Symphony Orchestra in Katowice.

In 1992 he founded Cello Ensemble “CANTABILE” and hold position of Artistic Director.

From 1997 he was also Artistic Director of Chamber Ensemble “Primo Allegro”.

Since 1981 until present days he teaches cello in Academy of Music in Kraków where he held position of Head of Cello&Double Bass Department. Besides giving masterclasses all over the world he also judges many international competitions and was appointed as a Visiting Professor of Central Conservatory of Music in Beijing.

In 2008-2012 he was the Vice Rector for International Cooperation and in 2012-2016 he hold position of Rector of Academy of Music in Cracow.

In 2012-2016 he was the Vice President of the Association of Baltic Academies of Music – ABAM.

From 2016 he is a member of Council of AEC – Association Européenne des Conservatoires, Académies de Musiques et Musikhochschulen.