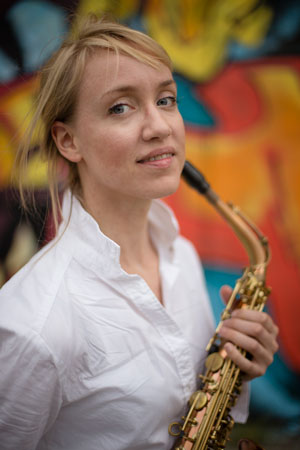 Femke IJlstra is one of the most success-full saxophonists of her generation.

Public, jury and press are impressed by her versatility and expressiveness.

Music and saxophone brought Femke around the world, from Iceland to China.

“Femke is truly a ambassador for her instrument, with absolute conviction and technical perfection she convinces herself and audience for her music.” (jury Frisian Emmy 15-12-15)

“Femke Ijlstra played with a refined musical depth and embattled elegance”
“Wonderful on the alto saxophone, gracefully provoked and engaged a distinct timbre, with melodious phrasing that resulted in unforgettable resonance.” (Bachtrack 15-5-2016)

Femke is professor at Prince Claus Conservatory of Groningen, Netherlands.

Femke plays on a regularly basis with world’s leading orchestras like the Royal Concertgebouw Orchestra Amsterdam, Budapest Festival Orchestra and the Toronto Symphony Orchestra.
She plays on historical saxophones in the Belgian Orchestra Anima Eterna.
In 2016 she won the audition for Tonhalle Orchestra in Zurich, Switzerland.

Soloistic activities are playing recitals in various music festivals and with symphonic (chamber) orchestra’s. She is a regular guest in radio- and tv-shows.

Femke loves chamber music:
she is founder of the Syrène Saxophone Quartet, and played for four years soprano saxophone in the very known Aurelia Saxophone Quartet. With Duo IJlstra-Garcia (since 2017) she played in The Netherlands and Spain. In 2018 Femke started trio FIE, in which she plays together with (bass-)clarinet and accordeon.

Femke IJlstra is curious about theater and other disciplines in art, which resulted in many music-theater performances and tours across the Netherlands. She worked together with actors, poets and dancers.

She recorded her first CD together with poems and artwork in a book called Stofsugersjongers. On this CD Femke plays music from M.A.Turnage, and new pieces written for her by Guillermo Lago and Micha Hamel.